Our 20-minute “Battery Down” forced break is a feature not a bug!  Slamming through these facts at the rate of 3 seconds apiece (or less as they go faster) is very INTENSE.   Students will do this game for a couple of hours at a time if you let them.  But, here’s the problem.  They will only do it for a couple of days, and then they will just wear out.  They just won’t want to do it anymore. We don’t want them to lose their enthusiasm, so……. After five minutes of play, up comes this screen (to the left).  We say the battery is down and will need at least 20 minutes to “recharge.” The countdown timer shows the amount of time left until the student’s break is over.  The student has to take at least a 20 minute break.  We want them to do a little practice a couple of times a day, but spaced out over a month or two.  The it takes for them to get through an operation, (the longer this is spaced out) the longer they will retain the information.  And they need to know these facts for a lifetime!  So a little bit each day is far better than sitting down for long periods of time until they are sick of it.

We purposely planned for your students to end a session anxious to play again.

Yes, they may complain that they have to stop, but that ensures that they will want to come back again later.  You want them to end their sessions wanting to play more.  That’s how you can get them to play and practice, time after time, day after day until they reach Level Z.  That’s how we win and that’s how they win! before the forced break.

You can now increase play time to ten or 15 minutes, but should you?  Only if they still LOVE it! 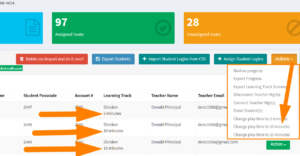 After years of game play lasting only five minutes at a time (under pressure from customers) Dr. Don allowed a change.  We added a feature to allow you, the parent or teacher, to adjust student play time UP to ten or even 15 minutes. The option is found under on both the orange bulk Actions button and the Individual Action button.  But with this freedom comes a great responsibility.   You have to make sure they are still enjoying playing! If you increase the time, you have to make sure they are not getting tired of playing!  The minute you hear a student moan or groan or complain, please move them back to 5 minutes! Seriously!! The first time anyone complains, move them back to 5 minutes.  And anyone else who does it, move them too.   They can learn just fine only working five minutes at a stretch!  Remember, you want them to practice at home also, which they won’t do if they are getting sick of it.  You want them to practice the whole time they are assigned to do it–and they won’t do that if they aren’t motivated to keep going.  So you better be sure if you move them up to ten or fifteen minutes.

2 thoughts on “Extend play time over five minutes–You can do it, but should you?”