(D) Slow the speed of the game

byAdmindon
You are here:
< All Topics 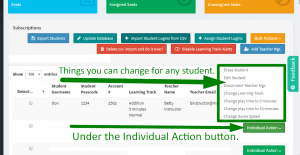 You can change things on the green Individual Action Button

When you want to change something for an individual student, go to the green button at the end of that student’s row that says “Individual Action.”  Pull down for a short menu, outlined in green in this picture.

Yes, you can change Game Speed, but should you? 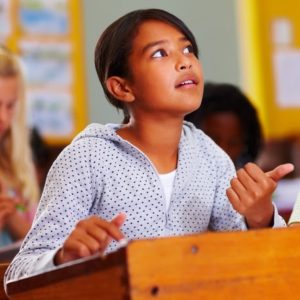 You can change how fast the student has to answer, but you probably should not.  The main goal of Rocket Math is for students to commit facts to memory, to be able to answer them instantly, from recall.

The fast pace means they don’t have time to “figure out” a fact–they just have to remember it.  If they don’t remember, then the game gives them a LOT of practice on a very small number of facts, until they do remember them. That is exactly the point of the game.  We want them to stop having to “figure out” facts and just remember the answer.   If the students are not used to “recalling” facts they will think that the game is just “too fast” for them.  If they keep playing and learning, more and more facts are committed to memory and can be answered instantaneously.  Almost everyone can do it–if you insist on it. 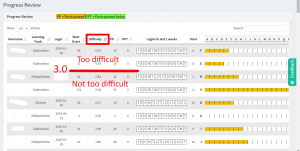 Many students may complain, but only if their difficulty score is over 3.0 do they need an adjustment made.  Students are not used to memorizing, which invariably involves repeating things over and over.  All students should expect to “Start Over” often, but some are upset by even starting over once.  Some are shocked the first time they cannot answer a problem in the 3 seconds allotted.  They don’t realize that persisting in playing will help them learn the fact fast enough to answer in 3 seconds.    Their difficulty score, from the Review Progress screen tells you whether or not the game is too fast for them. 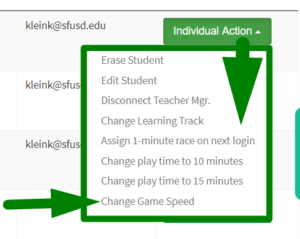 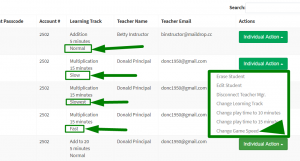