A fact family includes both addition and subtraction facts. 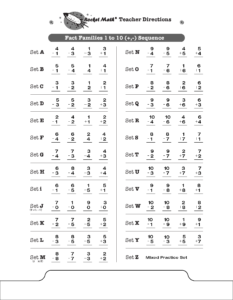 You can see to the right 25 examples of fact families such as Set A; 3+1, 1+3, 4-1 & 4-3.  The sheet shows the sequence of learning facts in the new Rocket Math  program Fact Families 1s-10s (+, -).  Each set that students learn from A to Y adds just one fact family to be learned, so it isn’t too hard to remember.  (That’s the Rocket Math secret ingredient!)

Flash news!! Someone looking for a master’s or doctoral thesis could do a comparative study of students using the fact families vs. the separated facts in Rocket Math. This could easily be a gold standard research study because you could randomly assign students to conditions within classrooms–the routine is the same for both–just the materials in their hands is different!  Just sayin’…

I separated out the 1s through 10s facts from the 11s-18s, because this seemed enough for one program.  It would be a good and sufficient accomplishment for first grade.  I have heard that some first grades prefer to keep the numbers small but to learn both addition and subtraction–so this program accomplishes that.

I most sincerely want students to be successful and to enjoy (as much as possible) the necessary chore of learning math facts to automaticity. Please give me feedback when you use this new program, Fact Families 1s-10s (+, -),  as to how it goes for the students.