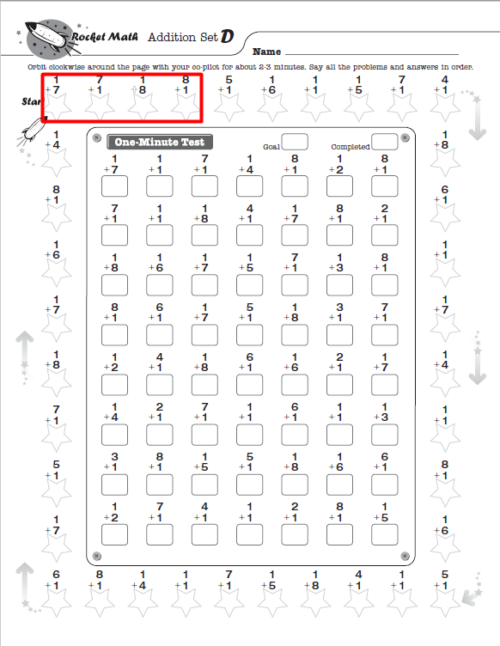 Part of the Universal Subscription Plan 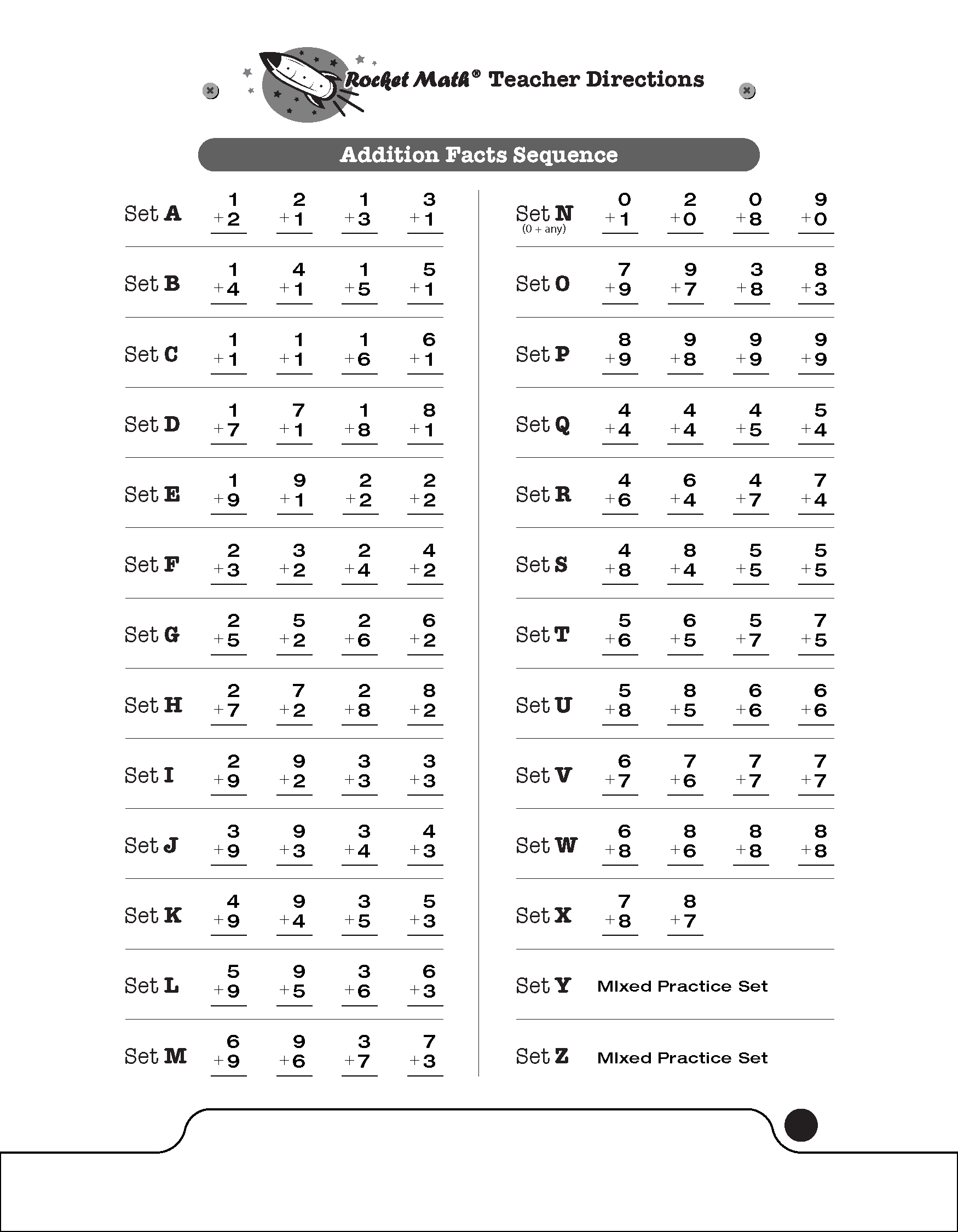 These are the basic single digit Addition facts 1s through 9s. Each of the 26 levels, A through Z, introduces two facts and their reverses.  You can see in the picture above of Set B, I have outlined the new facts in red.

Students practice orally with a partner, reading and answering the facts going around the outside of the sheet.  The partner has the answer key.  Then the two students switch roles.  After practice everyone takes a one minute test on the facts in the box–which are only the facts learned up to this level.  Each student has individual goals based on writing speed, but no one can pass a level if there are any errors.   You must give the special Writing Speed Test to set individual goals for your students.

Students should be able to pass a level in a week, if they practice the right way.   To the right you can see the sequence of facts that will be learned in the Addition 1s-9s program.  The program uses the four forms–that can be found in the forms and information drawer.

The most succinct way to be introduced to this program is this 8 minute video.

A fact family includes both addition and subtraction facts. This program is Part 2 of Fact Families, coming after Fact Families 1 to 10. You can see to the left the 18 examples of fact families taught in this program starting with Set A; 11-2, 11-9, 9+2, & 2+9.  The sheet shows the sequence of learning facts in the new Rocket Math  program Fact Families Part Two 11 to 18 (+, -).  Each set that students learn from A to R adds just one fact family to be learned, so it isn’t too hard to remember.  (That’s the Rocket Math secret ingredient!)

Part Two is a Best fit for second grade.  These facts come after the facts in 1 to 10, typically learned in first grade, so these are best for second grade.  The 25 fact families in 1s through 10s facts are just enough for one Rocket Math program.  It is a good and sufficient accomplishment for first grade.  With the 11 to 18 in Par Two for second grade there will be a lot of review.  In fact sets S through Z are all review. I have heard that some first grades prefer to keep the numbers small but to learn both addition and subtraction–so this program accomplishes that.

I most sincerely want students to be successful and to enjoy (as much as possible) the necessary chore of learning math facts to automaticity. Please give me feedback when you use this new program, Fact Families 11 to 18 (+, -),  as to how it goes for the students.

There are five worksheets for each skill.  Gradually as the student learns the skill the teacher/tutor/parent can provide progressively less help and the student should be able to do the problems without any guidance by the end of the five worksheets.  There are suggestions for how to give less help in the teaching scripts.
Back to Comparison Continue to Checkout

Students learn how these rules play out when starting with a positive number and a negative number, gradually learn these two variations of all four types of problems.  They learn to solve a problem type using the number line and then to recognize the pattern of each problem type by working several examples of each type.  This practice gives them a chance to build fluency with each problem type as they work with their partner on the top half of the page.  You will probably not be surprised that there is a one-minute test on each set.  The goals are slightly different than before.  Students are to be 100% accurate and to meet or beat their goal from the special writing speed test for mixed integers.

8 online lessons teach students how each type of problem is solved and why it is correct.

Rocket Writing for Numerals prepares students to write numerals efficiently, quickly and legibly. There are 72 pages of practice divided into four chapters which gradually increase in difficulty. (The red “Chapter 1, Chapter 2” etc don’t show in the actual program!)