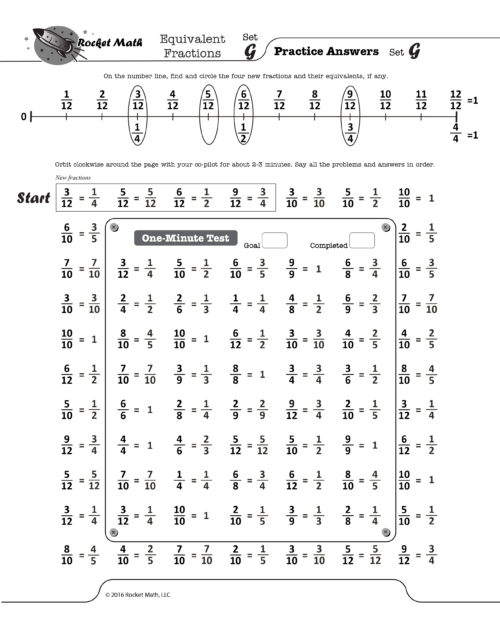 Here’s a 5 minute Educreations lessons on How the Equivalent Fractions program works.

Part of the Universal subscription package.

Click here for the full sequence of 100 Equivalent fractions that students will learn in this program.

Equivalent fractions, Factors, and Integers, are all pre-algebra programs that are appropriate for middle school students who already know the basic facts.

We include 4 removable, and reusable Goal Arrows with each Wall Chart. These stick to the Wall Chart to set motivating goals for your students. If your school needs Goal Arrows or additional Goal Arrows, here’s how to get them. Order Item 2008 and we will send you 48 additional arrows–enough for 16 teachers.

This is a program to ensure that students have a firm and correct understanding of fractions.  This will prepare them well for all subsequent work in fractions.  They will learn the essential rule about what the numerator and denominator mean, although they won’t be working with those terms.  They just learn through examples, practiced over and over.

Right from the beginning of Set A students will encounter improper fractions and mixed numbers.  They will see examples of every fraction first at the top of the page before they are asked to identify it on their own. You see that students see the fraction, see the words for how we say it and they see the fraction they are to write.

Unlike other Rocket Math programs, the test and the practice items are the same.  Of course the students have a page without the answers, while their partner holds the answer key. Students practice by saying aloud to their partner the fractions shown in the test.  Then they take the test on those same items, but write the answer.

These are the rest of the Subtraction facts that the Common Core suggests that students be able to compute mentally such as 18-15, 15-5, and 19-8. These obviously build on the basic single digit facts such as 8-5, 5-5, and 9-8. Students should find these fairly easy to master but they still need some practice to commit them to memory. LOOK OUT! Because all the answers are two digits, the number of problems students can be expected to answer will go down!  You must give the special Subtract from 20 Writing Speed Test to set new, lower, goals for your students.  To the left you can see the sequence of facts that will be learned in the Subtract from 20 program.  Otherwise the program is exactly the same as the basic Subtraction Rocket Math program and uses the same forms–that can be found in the forms and information drawer.
[otw_shortcode_button href="https://www.rocketmath.com/worksheet-program-subscription-levels-comparison/ " size="medium" bgcolor="#06427f" icon_type="general foundicon-left-arrow" icon_position="left" shape="radius" color_class="otw-blue"]Back to Comparison[/otw_shortcode_button] [otw_shortcode_button href="https://www.rocketmath.com/members/signupuniversal-subscription-options" size="medium" bgcolor="#F9BF00" icon_type="general foundicon-right-arrow" icon_position="right" shape="radius" color_class="otw-blue"]Continue to Checkout[/otw_shortcode_button]