Public displays of progress (or lack of it) risk humiliating some students.

Many teachers want to increase the motivation in Rocket Math by publicly displaying students’ progress. [Few do it as beautifully as this solar system with individual rockets for each student.] But what happens to the students who cannot learn as easily as the fastest?

Students learn at different rates and soon you will have some students FAR in advance of other students.  You will have some other students who are making very slow progress.  They may, in fact, be working as hard as they can, but they just need a lot more practice to pass a level.  [I do recommend that students who appear to need more practice should get more every day, such as an extra session each day as a remediation, and to be encouraged to practice at home as well.]  But even so the slower learners are going to be back on the early levels when other students are going to be at the top of the display.  That is going to look really bad to them, no matter how beautiful the display is.  Their rocket will be so obviously back at the beginning when others are so far ahead it will be a constant reminder that they are “not good” at Rocket Math. And some students who are publicly shown to be far in the lead may begin to act in a way that increases the competition between students.  Enough competition and even the average students will start to feel bad about their progress.

Coloring in the levels on their own personal folder and knowing what letter they are on is sufficient motivation for students.  They really want to move ahead.  [Trust me, every Rocket Math classroom I go into the students are chomping at the bit to tell me what level they are on!]  If students aren’t progressing, they might not be practicing the right way, or getting the extra session they need daily, but that is something you will need to help them with rather than a lack of motivation.  If you are very diligent and arrange things so that every student is passing within the six tries you can keep students together enough so that the amount of progress they have made on the chart does not become a humiliation, then this chart would be OK.  But if it begins to be a source of embarrassment students will come to hate Rocket Math.  Right now it is fine because most everyone is close together.  You could just change this after a month or so before it begins to be too obvious. 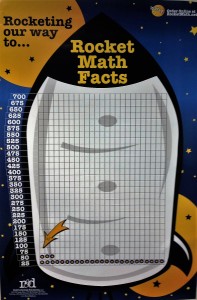 If you want to add to student motivation in a way that brings the class together take a look at the Rocket Math Wall Chart, with star stickers and goal arrows.  One big Rocket and each time students pass a level they get a star sticker to put on the chart, filling it from the bottom up.  You set achievable goals such as filling three rows in four weeks, place an arrow at that point and if they meet the goal they get some kind of celebration such as an extra recess or a popcorn party or music during independent work time or recognition from the principal.  This way every time any student passes a level they are helping the team meet the goal.  Even if a given student only passes once or twice during that four weeks that student still has contributed to the team “win” and can feel good about himself or herself. What’s more there is no public display of how that student is doing.

Note to anyone reading this post:  If you’ve never tried the Wall Chart enter this coupon code “NeverHadaWallChart” and I’ll take $6 off the $18 price.
Finally, many thanks to the wonderful teacher who gave me permission to use this picture to make this advice into a blog and to include it in my Hints and Tips, as I think many teachers are inclined to do what she did without realizing the drawbacks.