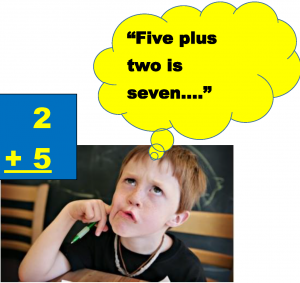 It is actually more important than you might think, that students practice by reading facts in a consistent way.

Rachel asks:
Hi Don,
After using Rocket Math for a week, I have a question. My daughter often reverses the order of the numbers when reading off the facts (i.e. 1+5 when it’s really 5+1). Of course, this doesn’t affect the answer in addition, but I wondered if I should correct her? She sometimes does it upwards of 50% of the time. Anyway, I just wondered if I should be concerned about her reversing the numbers, and if so what I should do about it.   Thanks, Rachel

If I were still running a school I would be offering you a teaching job right now! What a good question! So your daughter is doing something that most people do, which is trying to simplify the task and ignore the difference in the order. Because 5+2 and 2+5 are both 7 why not just think of them as the same thing?***

However, there is a risk. If a student always says “five plus two is seven” and never says it the other way around they will not have the jingle-like memory of “Two plus five is…seven” in their brain. Then when they encounter 2 + 5 and read it aloud to themselves the answer won’t pop into mind automatically. They would probably puzzle a second, realize it is the same as 5+2 and then know the answer is seven, but it won’t be automatic. [That by the way is what I’m trying to illustrate in the picture above, which isn’t Rachel’s daughter!] We want that automatic answer to pop into mind, unbidden, without having to think about it. In other words, we want it so that when your daughter says to herself, “Two plus five is…” the answer “seven” pops into her mind without having to think about it.

She of course, will tell you, “But, it’s the same!” Just reply with, “You have to say it the way it is written.” You can tell her I said so!

***Interestingly, when doing the Rocket Math app, the learner/player is presented with both facts in the same set–mixed between the two as they are being learning. When I am playing the app, I find I can’t remember if I got both of those to answer or just one. Although the app gives both, I just put them together in my mind to make it easier, and don’t even notice the order.