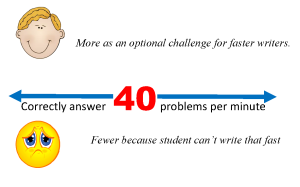 A parent asks:
Our daughter has a goal of 50 problems in a minute. She is finding that hard as more of the answers in multiplication have two digit answers. Is this normal, and if so, should her target be lowered as a result? I don’t want to challenge her below her abilities, but is she actually learning less if she is only required to answer 40 to pass instead of 50?

Dr. Don answers:
You are right that a student who can answer 40 problems in a minute knows their facts well enough. Initially we did not have any goals over 40, but we discovered that a lot of older students (4th grade and up) can write a lot faster and are capable of having higher goals than 40 and can achieve higher goals with 3 or 4 days of practice.

There is a caveat on goals over 40, that is in the FAQs/Teacher directions in Part K. Here it is:
Please note: There is a special exception for students who are such fast writers that they have goals OVER 40 in a minute. On the bottom of the Goal Sheet, please notice the exception for fast writers. Students who have goals over 40 should try to meet those goals, but only for up to six days. As long as they are answering over 40 problems per minute without errors, they should be passed after six days. It is nice for those who can write faster to have higher goals, but we don’t want it to slow them down too much.

I have had people suggest to me that because of more two digit answers later in the sequence in Multiplication it slows students down and therefore goals should be lowered.  I would say, there is a case for keeping goals the same rather than raising them.  Here’s what the data show in terms the number of two-digit answers out of the 63 answers on a test:
Set B zero, Set D 23, Set G 37, Set K 43, Set N 46, Set Q 49, Set T 50
So there is a bit of a case to be made for the extra digits, especially if goals are raised really high during Set A or B.  The writing speed test is 50% two digit answers, but by Set G in Multiplication the test is a higher percentage of two digit answers than that.  So keeping the goals the “same” in Multiplication in terms of problems still means the challenge is increasing in terms of digits.  Watch out for any students who cannot pass within six tries/days with good practice.

The next caveat is that being able to answer orally 40 problems in a minute (just saying the answers) is fast enough to indicate no hesitations. So either orally or in writing to do 40 problems in a minute indicates a student is at mastery. In either case we would want the student to take six tries to meet a higher than 40 goal if they can. As I said in another post, we want them to practice 3 or 4 days on a set before passing, so we don’t need to pass them along before that.

The question is whether she can weather three or four days of practice without feeling like a failure. She shouldn’t, but compared to the passing every day she was doing before, it might seem like it.  Building up her stamina and getting her to take 3 or 4 days of practice on each set is optimal.