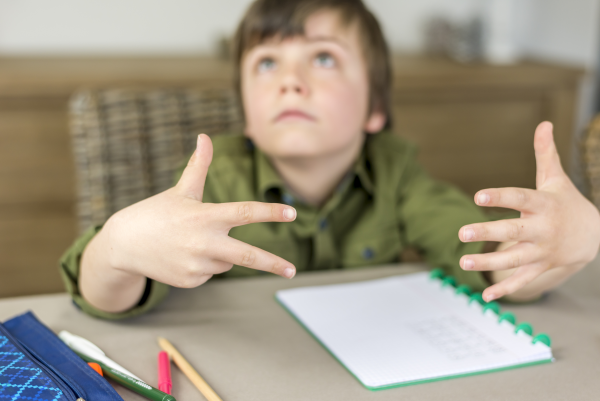 Rocket Math can make learning math facts easy.  But even more important it can make teaching computation easy too!  One of the first teachers to field test Rocket Math was able to teach addition facts to her first grade class, and then loop with them into second grade, where she helped them master subtraction facts as well.  She told me that because her second graders were fluent with their subtraction facts, they were ALL able to master regrouping (or borrowing) in subtraction in three days.  What had previously been a three week long painful unit was over in less than a week.  All of them had it down, because all they had to think about was the rule for when to regroup.  None of them were distracted by trying to figure out subtraction facts.

When math facts aren’t memorized, computation will hard to learn, hard to do, and full of errors.

When math facts aren’t memorized, computation will be hard to learn.   I used to think computation was intrinsically hard for children to learn.  Because it was certainly hard for all of my students with learning disabilities.  But none of them had memorized the basic math facts to the point where they could answer them instantly.  They always had to count on their fingers for math.

When I learned more about the process of learning, I found out that weak tool skills, such as not knowing math facts,  interferes with learning the algorithms of math.  When the teacher is explaining the process, the student who hasn’t memorized math facts is forced to stop listening to the instruction to figure out the fact.  When the student tunes back into instruction they’ve missed some essential steps.  Every step of computation involves recalling a math fact, and if every time the learner has to turn his/her attention to deriving the math fact they are constantly distracted.  That interferes with the learning process.

When math facts aren’t memorized, computation will be hard to do.   Having to stop in the middle of the process of a multi-digit computation problem to “figure out” a fact slows students down and distracts them from the process.  It is easy to lose your place, or forget a step when you are distracted by the difficulty of deriving a math fact or counting on your fingers.  It is hard to keep track of what you’re doing when you are constantly being distracted by those pesky math facts.  And of course, having to figure out facts slows everything down.

I once stood behind a student in a math class who was doing multiplication computation and when he hesitated I simply gave him the answer to the math fact (as if he actually knew them).  He loved it and he was done with the small set of problems in less than half the time of anyone else in his class.  Children hate going slow and slogging through computation. Conversely, when they know their facts to the level of automaticity (where the answers pop unbidden into their minds) they can go fast and they love it.  That’s why “Because going fast is more fun!” is the Rocket Math tag line.

When math facts aren’t memorized, computation will be full of errors.  When I learned more about basic learning, I found out that the frequent student errors in computation were not simply “careless errors.”  I thought they were because when I pointed out simple things like, “Look you carried the 3 in 63 instead of the 6.” my students would always go “Oh, yeah.” and immediately correct the error.  If I asked them they knew that they were supposed to carry the number in the tens column, but they didn’t.

I thought it was carelessness until I learned that such errors were the result of being distracted.  Not by the pretty girl next to you, but by having to figure out what 7 times 9 was in the first place.  After going through the long thinking process of figuring out it was 63 they were so distracted that they carried the wrong digit.  Not carelessness but distraction.  Once students instantly know math facts without having to think about it, they can pay full attention to the process.  They make far fewer errors.

In short, don’t be cruel.  If you have any autonomy available to you, first help your students memorize math facts and then teach them how to do computation in that operation.  In other words, teach subtraction facts before subtraction computation.  If you help them get to the point where math fact answers in the operation come to them without effort, you’ll be amazed at how much easier it is to teach computation, for them to do it and at the accuracy with which they work.