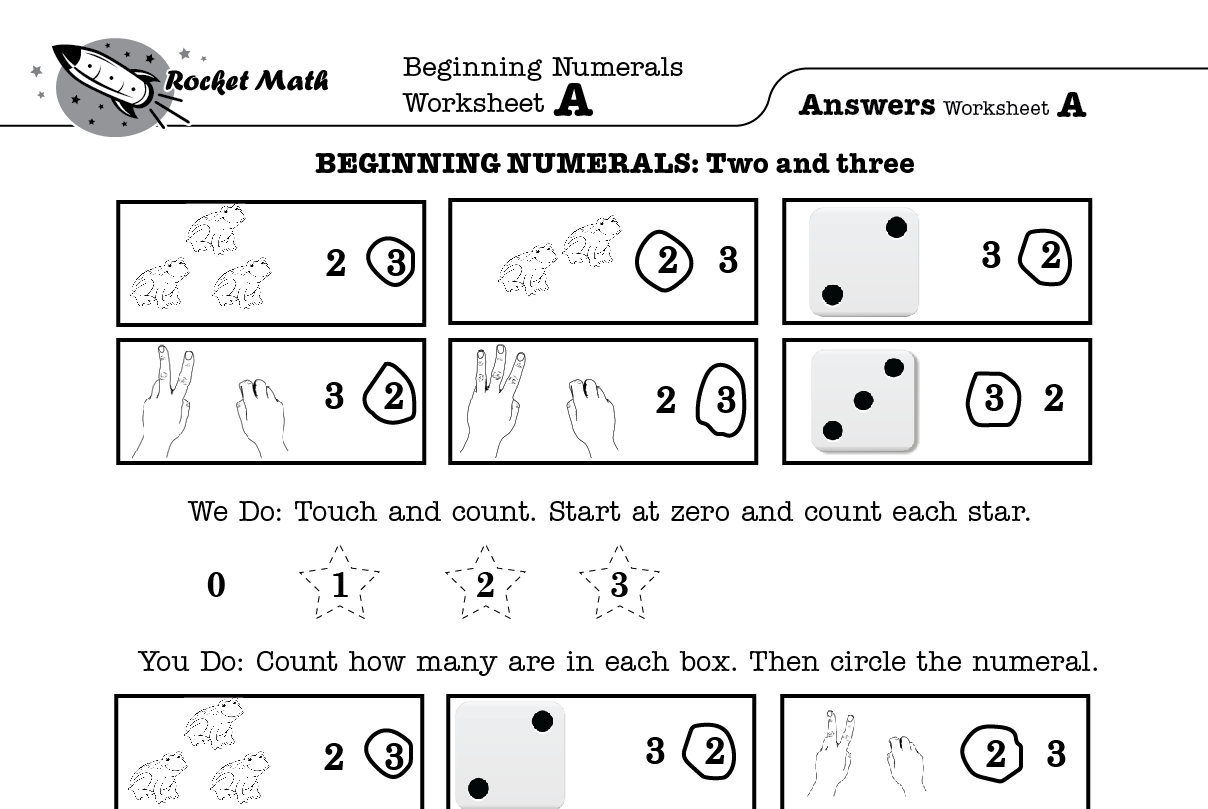 Dr. Don has created another math program and put it into the Universal level virtual filing cabinet at Rocket Math. This is a beginning program for kindergarten students and is to help them learn counting and numerals. That means they can’t learn on their own, the teacher must provide instruction. Teachers can use the counting objects kindergarten worksheets to effectively teach students to count objects aloud and then match the word with the numeral. You can see the top half of Worksheet A above.

If you’re already a Rocket Math Universal Level subscriber, you can find the worksheet in your virtual filing cabinet. Not a subscriber yet? Get the counting worksheets.

I Do: Demonstration of Counting

Each worksheet begins with a demonstration of counting objects and circling the numeral that matches. On Worksheet A, there are only the numerals two and three to learn. The teacher demonstrates (best with a document camera so all students can see) how she counts the objects and then points out that the answer is circled. Suggested teaching language is something like this,

“I can do these. Watch me count the frogs. One, two, three.. There are three frogs in this box. So they circled the three. Everybody, touch here where the three is circled. Good.

How many frogs were in this box, everybody? Yes, three.

Now watch me do the next box.”

We Do: Counting Together

In the “We Do” portion of the worksheet, the teacher counts the stars first as a demo and then with the students. Worksheet A you all just count three stars. Suggested teaching language is something like this:

“Our ‘We Do’ says to touch and count. Start at zero and count each star.

We are going to touch and count the stars. Put your counting finger on zero,

everybody. We are going to start at zero and count each star. Let’s count.

One, two, three. We counted three stars. That was great!

Let’s do it again! Fingers on zero, everybody. Let’s count. One…”

By Worksheet S the teacher and the students are counting 12 stars together.

The program has a page of teacher directions with suggested language for teaching the worksheets.

You Do: Independent Counting

In the “You do” portion of the worksheet (after learning the numerals with the teacher), the students are asked to count the items in each box and circle the correct number. They are not asked to form the numerals–that’s numeral writing skill. They just identify the numeral and circle it. Besides cute items, there are also dice to count, fingers to count, and hash marks to count–so students can learn multiple ways of keeping track of numbers.

Passing a level requires 100% accuracy. Students who make any errors should be worked with until they can complete the worksheet independently and get all the items correct.

This Beginning numerals program will build strong beginning math skills for kindergarten students learning the meaning of numerals. Combined with Rocket Writing for Numerals it will set students up for success in elementary math.

If you’re already a Rocket Math Universal Level subscriber, you can find the worksheet in your virtual filing cabinet [use your link]. Not a subscriber yet? Get the counting worksheets.