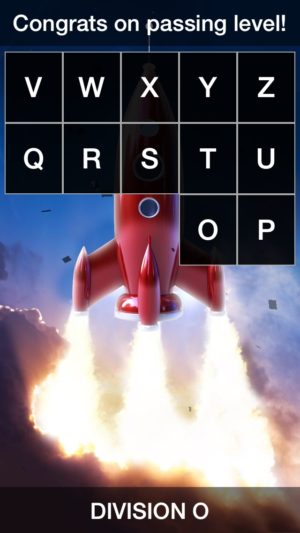 There are plenty of math facts apps out there that let students practice math facts they have already learned.  Few apps actually teach math facts.  But apps from Rocket Math and XtraMath are exceptions.  While both apps teach students math facts, one is more effective and fun.

While both apps contain these important features and teach math facts, there are a few vital elements that make an effective app like Rocket Math standout.

An effective app gives a student a sense of accomplishment 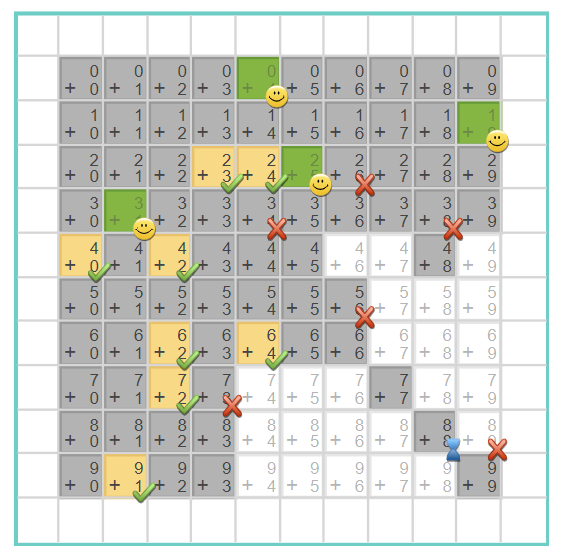 The difficult thing about learning math facts is persevering.  There are so many to learn! It takes a while and students have to persevere through boring memorization tasks. The best way to help students learn their math facts is to give them a clear sense of accomplishment as they move through each task.

To develop a sense of accomplishment among its app users, XtraMath displays math facts on a grid.  XtraMath tests the student and marks the ones that are answered quickly (within 3 seconds) with smiley faces.  It takes a couple of sessions to determine what has been mastered and what hasn’t, so there isn’t a sense of accomplishment at first.  This grid is displayed and explained, but it’s not easy to monitor progress.  Over time, there are fewer squares with facts to learn, but there isn’t clear feedback on what’s being accomplished as students work. 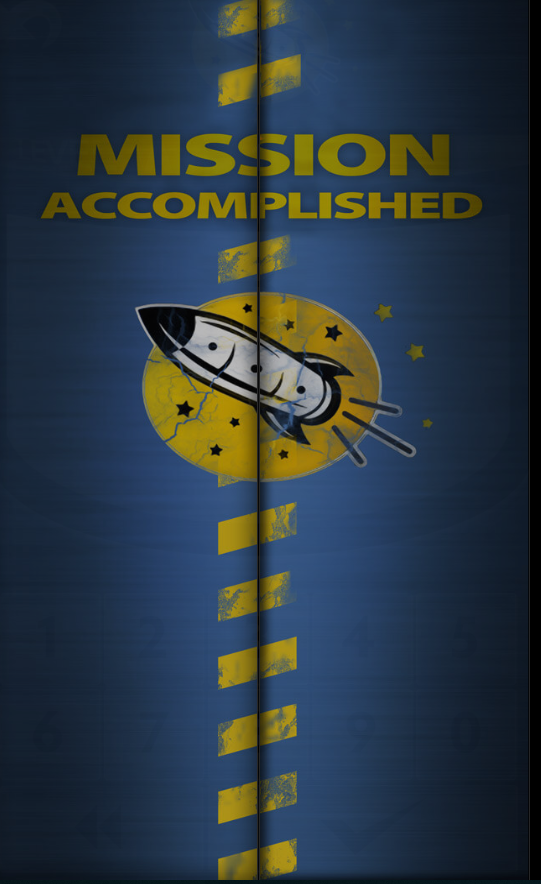 Conversely, Rocket Math begins recognizing student progress immediately and continues to celebrate progress at every step.  The Rocket Math app begins with Set A and progresses up to Set Z.  Each lettered set has three phases: Take-Off, Orbit, and the Universe.  That means there are 78 milestones celebrated in the process of moving from Set A to Set Z.

Take-Off phase has only 4 problems to learn.  They are repeated until the student gets 12 correct in a row.  When the student does that, the doors close (with appropriate sound effects) to show “Mission Accomplished.” They also are congratulated by one of a cast of voices.  Something along the lines of, “Mission Control here.  You did it!  Mission Accomplished! You took off with Set A!  Go for Orbit if you dare!”  With this type of consistent (and fun!) recognition, students clearly understand that they are progressing, and they get the chance to keep learning “if they dare!” 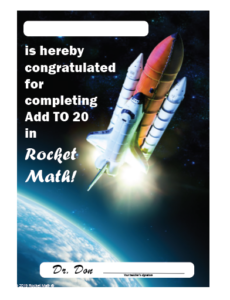 In addition to the three phases, students progress through the sets from A to Z.  Each time a student masters a set, by going through all three phases, the student gets congratulated and taken to their rocket picture, as shown above.  When a level is completed, the tile for that level explodes (with appropriate sound effects) and drops off the picture, gradually revealing more of the picture as tiles are demolished.

In the picture above, the tile for “N” has just exploded. After the explosion, a student is congratulated for passing Level N and encouraged to go for Level O if they dare.   When you talk to students about Rocket Math, they always tell you what level they have achieved.  “I’m on Level K!” a student will announce with pride.  That sense of accomplishment is important for them to keep chugging along. Rocket Math also has available Learning Track certificates from Dr. Don and the teacher for completing through Level Z. 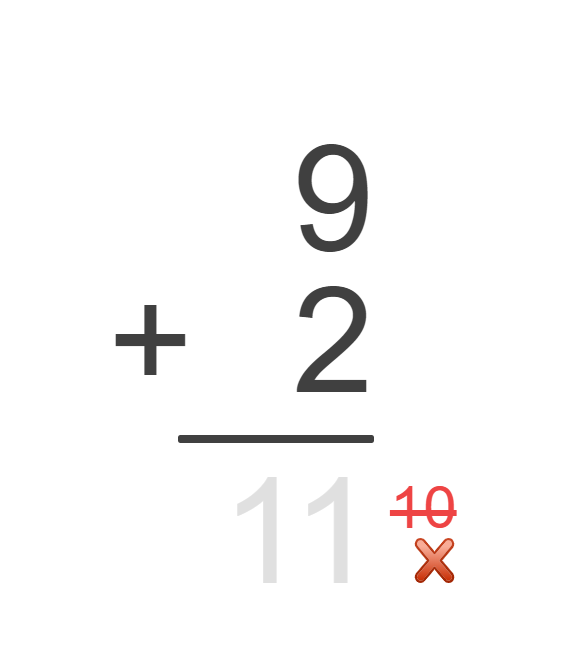 Once the student correctly answers that target problem, the app presents the problem again.  Then it presents it twice more interspersed with other problems. 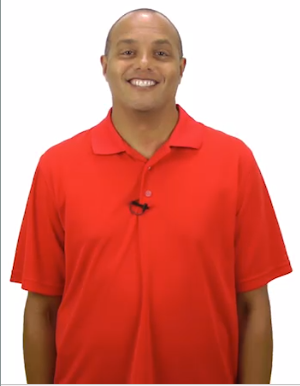 Without feedback, students can’t learn efficiently and get frustrated. But the feedback cannot be generic. It has to dynamically respond to different student behavior.

XtraMath’s charming “Mr. C” narrates all of the transitions between parts of each day’s lesson.  He welcomes students, says he is happy to see them, and updates students on their progress.  He gives gentle, generic feedback about how you’re getting better and to remember to try to recall the facts instead of figuring them out.  However, his feedback remains the same no matter how you do.  In short, it is non-contingent feedback, which may not be very meaningful to students. 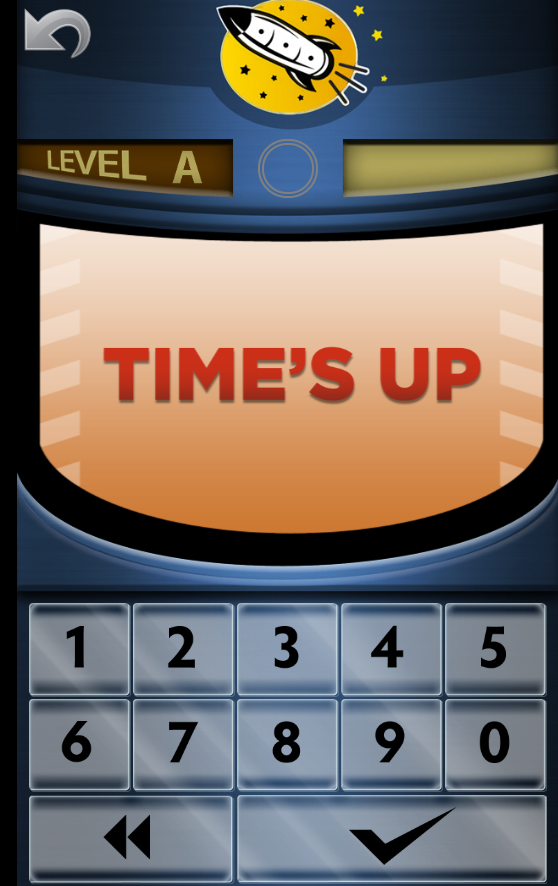 Differing from XtraMath, Rocket Math offers students a lot of feedback that is contingent. Contingent feedback means that students will receive different types of feedback depending on their responses.

The Rocket Math app gives positive feedback for all the 78 accomplishments noted above.  It also doles out corrective feedback when the student isn’t doing well.

As noted above, students receive corrective feedback on all errors. They get feedback when they take longer than three seconds to answer too.  The “Time’s Up” screen on the right pops up and Mission Control says, “Ya’ gotta be faster!  Wait.  Listen for the answer.”  And then the problem and the correct answer are given.  Students get a chance to answer that fact again soon and redeem themselves–proving they can answer it in 3 seconds. 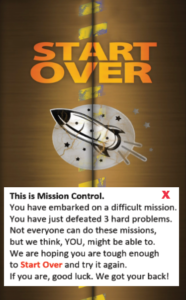 The app tracks errors and three errors means the student needs more practice on this part.  The doors close (with appropriate sound effects).   The student is given encouragement that they have defeated three hard problems, and a challenge to Start Over if they are tough enough.  At that point, the “go” screen appears and the student has to hit “go” to open the doors (with appropriate sound effects) and try it again.

When it comes to recognizing a student’s success, the Rocket Math app holds nothing back. After a student completes a phase, one of a cast of voices gives enthusiastic congratulations as noted above.

Typically, students don’t have to “start over” more than once or twice in a phase, but they still feel a real sense of accomplishment when they do complete the phase.  The feedback students get from Rocket Math matters because they have to work hard to earn it.

How much does an effective math facts app cost?

It is hard to beat the price of XtraMath, which is free.  XtraMath is run by a non-profit based in Seattle.  They have a staff of six folks in Seattle, and they do accept donations.  Their product is great, and they are able to give it away.

Rocket Math is run by one person, Dr. Don.  He supports the app, its development and himself with the proceeds.  He answers his own phone and is happy to talk with teachers about math facts.  The Rocket Math Online Game is a good value at $1.15 a year per seat (when ordering 100 or more seats).  Twenty to 50 seats are $2.30 each. And fewer than 20 seats cost $4 each per year.  As one principal-customer of Rocket Math said, “We used to have XtraMath.  We’d rather pay a little bit for Rocket Math because the kids like it better.”