Here’s an example of the problem.   A brachistochrone (pictured above) is a curve between two points along which a body can move under gravity in a shorter time than for any other curve. It is the same curve as a cycloid, but just hanging downward.   A cycloid is the path traced by a point on a wheel as the wheel rolls, without slipping, along a flat surface. The standard parametrization is x = a(t – sin t),y = a(1 – cos t), where a is the radius of the wheel. 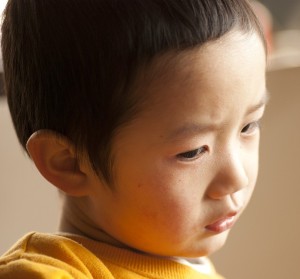 Instruction not working.  If you watch instruction where the term and the concept have been taught simultaneously, confusion ensues when the teacher uses the term.  You’ll see students looking away as they try to bring up the explanation of that weird new term in their memory (see the pictured example?).  Sometimes the teacher will notice this and give a thumbnail definition or example of the term, and the students will then remember.  However, the teacher should then realize that the concept was not connected to the new vocabulary term.

When a new vocabulary term is used to introduce a new concept, students will need a lot of practice with recalling the term and the definition before it can be used in instruction.  On the other hand, students can quickly understand and use new concepts and ideas in math if they don’t have to learn a new word for it.  Using a common sense term, the idea or concept can be worked with, the implications studied and it can be applied to real world problems almost immediately.  Students can later quite easily learn proper vocabulary terms for concepts they understand and recognize.  Here’s an example.

Then after students have worked with the concept of “the shortest time curve” for a couple of weeks, you can add the vocabulary term to it. “By the way, the proper mathematical name for “the shortest time curve” is called a brachistochrone. Isn’t that cool?”  Students will want to learn its proper name as a point of pride about knowing this fancy term for a concept they already “own,” rather than a point of confusion.